Climate change is often seen as something that occurs in the atmosphere. Not so many people know that soil is a vital element of the climate system. Yet, soil is the second largest carbon store, or ‘sink’, after the oceans. Soil carbon sequestration is seen as one of the most promising mitigation measures to combat climate change. The FAO (2017) estimated that soils can sequester more than 10% of the global anthropogenic greenhouse gas emissions.

However, at the same time, land use changes and agriculture are major sources of greenhouse gas emissions. Land use changes account for more than 10% of the global greenhouse gas emissions and mainly refer to drainage of peatland and transforming forests into arable lands. Agriculture also accounts for more than 10% of the global GHG emission mainly through emissions from livestock and fertilizer application (Figure 1). 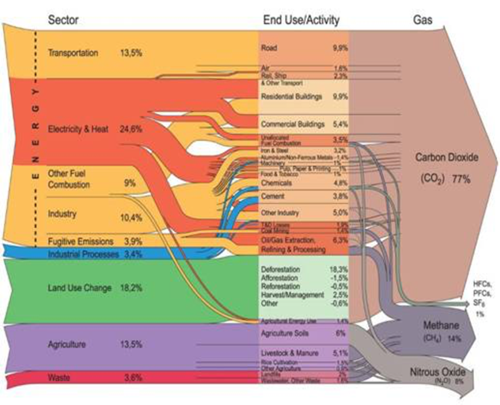 Hence, the paradoxical situation of climate change and soil is that soil is both a source and a solution for climate change. This dualistic role of soil in its contribution to climate change causes confusing discussions. Let me try to explain.

First of all, there are differences in greenhouse gases (GHGs). Most often, GHGs refer to carbon dioxide (CO2), that is the gas that is produced when an organic material (e.g oil, peat, coal) is combusted. However, there are also other gases that contribute to the greenhouse gas effect, for instance nitrous oxide (N2O) and methane (CH4). These gases are produced, amongst others, after application of nitrogen (N) fertilizers and by ruminants, respectively. N2O and CH4 are much stronger greenhouse gases than CO2. N2O and CH4 are about 310 and 21 times stronger than CO2, respectively.

Secondly, agriculture is the only sector which has a positive growth scenario for GHG emissions for the coming decades. The IPCCC recognizes that even when the best climate smart solutions are introduced, the contribution of agriculture to the global greenhouse gas emission will increase, if we want to comply to the increasing demand for biomass. Here the demand for biomass (food, fibre, feed) is positively correlated to greenhouse gas emissions.

In short, climate change has an impact on soil, but soil (and its use) also has an impact on climate change. The interrelations between climate change and soil processes are complex and variable in time and space. For instance, the rise of CO2 concentrations will increase crop growth, resulting in potentially more carbon sequestration, but the temperature rise will, at the same time, increase mineralization of organic matter thereby releasing greenhouse gases (van Groenigen et al., 2007). Another example was published by Bos et al. (2017) who showed that compost application sequestered carbon, but at the same time released CO2. These feedback loops are numerous and alter under different agro-environmental conditions and no one really knows the net effects of these interactions.

Hence, realizing the soils’ potential to combat climate change demands for innovations that decrease emissions from soils and sequester carbon at the same time, whilst respecting the numerous and complex soil processes. To understand the net effect of these innovations careful monitoring is essential. Simple and robust tools may help to accomplish this task. SoilCares (www.soilcares.com) has developed a handheld soil management tool (Figure 2). It contains a Near Infrared (NIR) sensor and connects to a global calibration dataset via a smartphone. The SoilCares soil Scanner has been successfully introduced worldwide as a fertilizer recommendation tool; providing thousands of farmers with localized and customized fertilizer recommendations. More balanced fertilization reduces the N2O emissions from N fertilizers. Additionally, with same device, but with a different app, soil quality (pH, organic C and CEC) can be monitored at a very accurate level. This is an important innovation as it will allow to monitor changes in soil C sequestration. The combination of the two apps (fertilizer recommendation and soil quality monitoring) is an important step on the road to (real) climate smart agriculture. 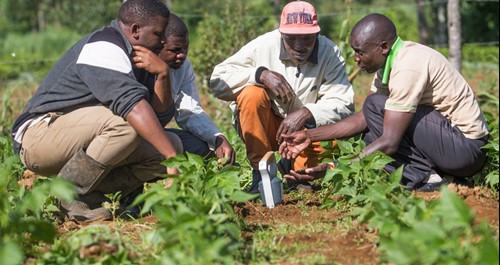 Figure 2. Farmers in Kenya working with the SoilCares Scanner to improve their land management.